Just a simple educational game.
This one is for the kids, unlike some of my more adult games.

Even a child could beat it.

Tell me what you think in the comments.
♫♫♫

if you are interested in joining the community, join the discord here

How long did it take you to get to this point? :-)

About 2 hours, but now I know your ABC's.

I love this game! I thought it was funny and rewarding. It got me through a brief stressful moment in my life. Two thumbs up! P.S. I was directed here by one of my favorite websites, freeindiega.me

Thank you Anthony Joseph (if that is your name). The website freeindiega.me is a great website! I am glad you are willing to try out new and different games! Sergio, the person who runs it, is great! I am sorry you had stress in your life, these are stressful times.

Hi IsThisStatic! I am glad you enjoyed it, and thank you very much for playing! Some answers were funny? Was it good that they were funny? Well, I will try next time to make all of them either not funny or all of them funny.

easy game for babies. very fun I learned so much 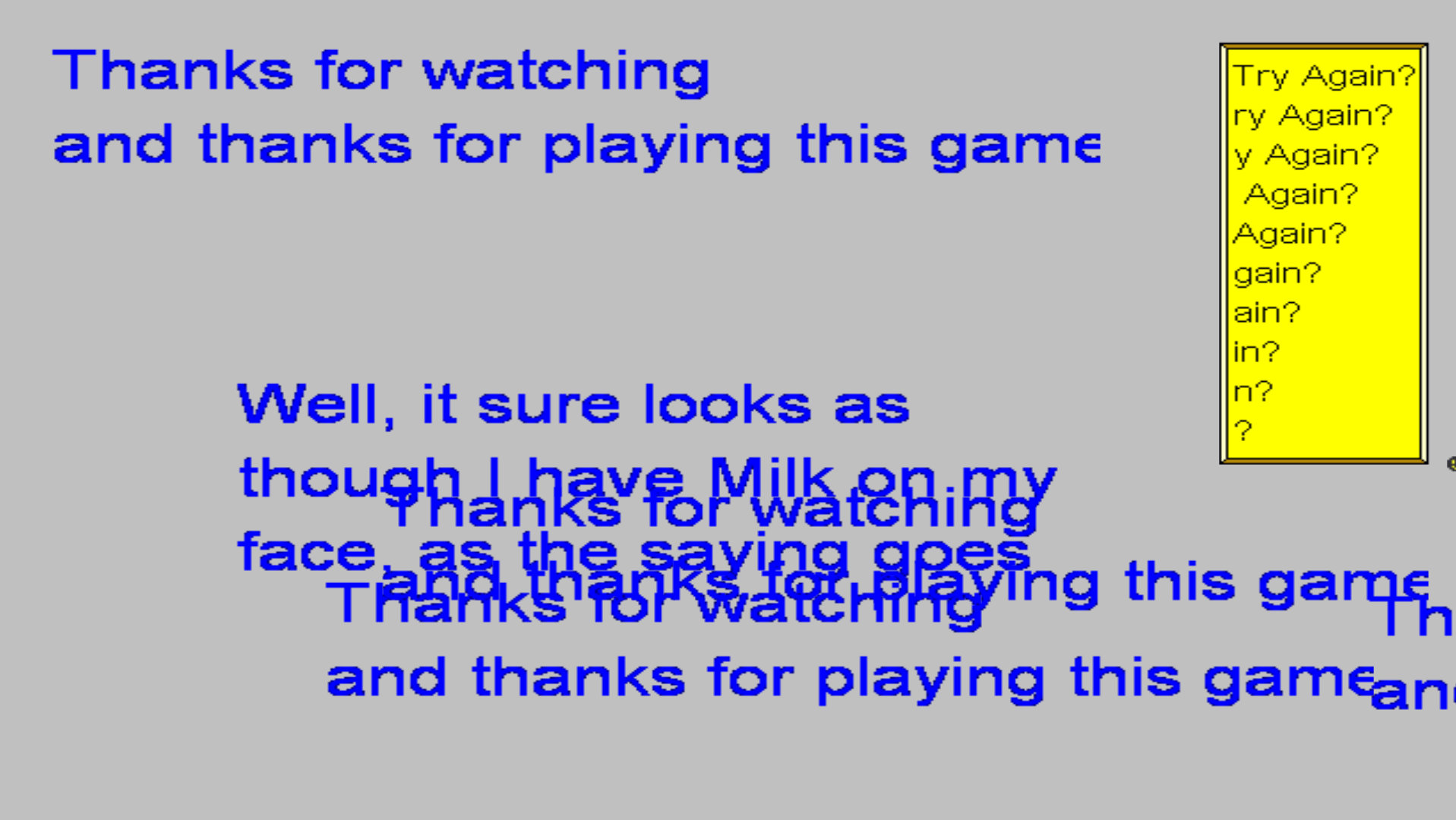 Well, I am glad that you learned a lot! I see myself as an educator. Secondly, I am a storyteller. Third, I am a film maker. Fourth, I am an artisan. Fifth, I am a real gamer. Hopefully, if you liked this game you will be inspired to do some of these things yourself. I made this game in about an afternoon. It is good to know that in an afternoon you can teach a baby the alphabet and put it to bed with a story at the same time.

No reason to brag about it! Also, feel free to brag about it. It is an accomplishment to be a game even if it is for a baby.! Most people buy games on Steam and they never beat them. I am sure you have done this, if you are a REAL GAMER like me. It is great that you beat a game that you DIDN'T EVEN PAY FOR. Isn't that magical. Well, if you feel like paying for this game, you can give me $1.23, or, you don't have to give me anything.

Anyhow, I appreciate you playing and leaving a comment!

last one will be the only one left.

I am only at H but I am determined to beat this. I cannot even explain how much I hate this though, but nonetheless I will conquer this hell

Thank you for giving this game a go! I really appreciate that you found a game by an indie developer and gave it a try. It is interesting that you are determined to finish it even though you 'hate' it. I am sorry that you hate this game. What is wrong with it? I will try to improve upon these things later developing games, any feedback will be useful!

Anyhow, thanks again and I hope you find it satisfying if you are able to beat it! Thanks again.

The game, it messes with my head, it gets in your brain it just messes with everything. You expect the unexpected for the letters but then are still suprised. Up to Elephant it was fine, then things took a turn. Nobody would expect the tomato to be the picture for the word "fruit", heck, most people dont even know it is a fruit. You think you know what K is, then it turns out that the kangaroo is actually Joey, so then what would K be? It is basically the most intense psychological brain tease in the world. The repeated clicking after you fail gets to the point where you mindlessly blurt the names of each object out loud without knowing it. The anger builds up as you guess with no clue of what letter could possibly be represented by which picture. Guessing it right doesnt ease the pain, it only makes it worse when you figure out what the word was, and realize how stupid you were, then you question on whether you are stupid, or if the game is illogical in what picture was represented by what picture. I spent nearly 30 minutes and could only get to K before I felt my mind slipping.

That is useful! I will take this feedback and make sure to make better games in the future!

Tell me if you ever complete the game. You may have a different perspective at that point, but maybe you won't.